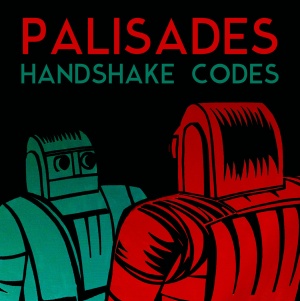 Yeah, this review is way late, (I know, I’ve got a lot of catching up to do). Palisades are a band who have effectively stitched themselves into the fabric of Lexington music as one of those bands that most everyone knows about to some degree. They’re made up of three guys who play really well and – perhaps more importantly – know how to work within a music scene like the one in this city. The members of the band are constantly finding ways to collaborate with other musicians in town, and they make posts on social media about other band’s concerts as often than they do for their own shows. In a musical and cultural landscape like the one found in Lexington, this is an extremely healthy thing, and goes a long way in helping everyone.

So the music? The EP is the first of three planned releases for 2014/15 from the band, and features four snappy, catchy rock songs that come in at just about twelve minutes total. “Anecdotes” starts off with a driving guitar riff, and wastes no time getting to the lyrics, before reaching a pulsing chorus and a great guitar solo. The second track, “All Hands on the Take,” is stocked with another catchy solo, guitar embellishments and great breakdowns between sections of the song. Flipping the record, you start out with my favorite track of the EP, “Parlor Games/Party Tricks.” The song starts off with a lone strum of a chord, the first couple lyrics, and then straight into the track – this song has a really nice bridge, and an awesome coda (not to mention my favorite guitar tones of the entire release.) The final track, “Pedal Sassy,” is an instrumental track, but is every bit as catchy as the songs that preceded it – as a final track, it pulls things together very nicely.

The audio production on Handshake Codes is great, which is no surprise, when you know that J Tom Hnatow and Duane Lundy of Shangri-La produced and mixed it, respectively. The songs are tight, well-rehearsed, and have a great polish to them that shows off the drum and guitar work of Neil Bell and Mark Richardson put into it. Scott Whiddon’s experience in Transylvania University’s Writing Center shows here – his lyrics are clever, calculated and delivered with confidence and nuance. If you’re a fan of poppy rock songs that get right to the point, this record is a must get – you should be on the lookout for the two follow-ups that these guys have planned for later this year, too.