Those who have seen Dr. Paul perform live can tell you that it’s a unique experience to take in. It’s like going to watch psychedelic karaoke where the singer has written all the songs themselves – the tracks flow into each other, one right after the other, to the point that it becomes disorienting. Calling Daddy Anarchist, in its recorded form, gives the listener the benefit of being able to listen to the music one song at a time, allowing time to digest things and better understand what Dr. Paul is trying to get across.

The album opens with “Artificial Significance,” setting the aural tone for the album with lo-fi, laid-back guitar, affected vocals, and a drum machine chugging in the background – the repeated ‘the future’s just ahead’ has a way of getting stuck in your head. “Up To My Wasted” has an upbeat feel, instrumentally, but lyrics like the opening line, ‘not even the sun can bring me up anymore,’ have a way of making it lonely. Later in the album is “King of Crash Landings,” which alternates between laid-back verses and a more intense chorus with the memorable lyrics ‘it’s like screaming in a vacuum with a knife in your eye // the king of crash landings here saying goodbye.’ My favorite of the album is “Trouble Sleeping In,” which may also be the album’s most accessible and catchiest track – it has some of my favorite lyrics of the album, like ‘wait… I can grow back my long hair // too late… now the timing isn’t there’ and ‘if you ever want for nothing, you can get it over here.’ A few songs later is a solid cover of Beat Awfuls’ “Jackie Ono,” another Lexington band that Dr. Paul plays in.

Calling Daddy Anarchist explores dark feelings of loneliness and disappointment through some really intimate-feeling lyrics and storytelling, though Dr. Paul does a nice job of sprinkling in occasional pieces of humor throughout. Those that like other Lexington acts like Beat Awfuls, Cherry Crush, and Jovontaes ought to really enjoy this. 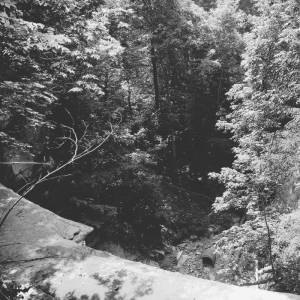 Imaginary Towers is the moniker for Matt Wilson, an electronic musician based in Vine Grove, Kentucky – he released the calm Revive EP just over six months ago. There Are No Shadows Here, seems like the logical continuation of that sound – here, with the benefit of a longer runtime allowing for the exploration of more sounds and ideas. “Whispers,” the album’s third track, finds Wilson’s auto-tuned voice doubled by the synthesizer, an instrument which rises to its loudest presence of the album – even if only briefly – before receding back into the existing texture. His voice is most exposed during the beginning of “I Want You to Have Everything,” before more layers of sound swallow the song. My favorite of the album is “You Can See Through Me,” in which another voice joins Matt’s as he sings “I’ve seen things I can’t explain, you can see through me” – the build to the song’s climax is also paced perfectly, paying off big time. “Highs Mids Lows” is placed towards the end of the album – its melody laid across an extended chord progression, and the track’s title found at the end of each verse: “just don’t get hooked on the highs and the mids and the lows.” For those that heard and enjoyed Revive last fall, this should be a familiar, enjoyable listen – Matt Wilson crafts a serene, densely textural atmosphere on There Are No Shadows Here, making it easy for the listener to close their eyes, relax, and breathe.

Tracks I Liked: I Am You!, Whispers!, I Want You to Have Everything!!, You Can See Through Me!!!, Joy in Anything!, Highs Mids Lows!!

Revive starts off quietly with the sounds of crickets chirping and a fire crackling, patiently layering electronic piano and low-key digital drum beats. It feels like the appropriate setting for modern life in rural Kentucky – Imaginary Towers hails from Vine Grove, tucked just south of Fort Knox and home to just over 5,000 people. Though the first track is instrumental, “YRUSO” introduces electronically affected vocals asking “why are you so tired and unhappy” and “why are you so restless and angry” before the singer turns the question towards themselves. “1994” has the catchiest vocal melody of the five tracks, mixing distorted keyboard with clean and clear vocals that reflect on the optimism of childhood, singing “you would never know it now, but there’s a part of me that stayed behind in 1994.” Things slow down even more on “Desire,” parking the vocals a little further back in the mix and allowing the mixture of synthesizers and drums to gently swell and retreat like waves on a shore. A sample of a child speaking places the final track, “Revive,” back into the mindset of the innocence of youth – it remains a quiet and simple track that fades out softly with the sounds of rain and a resonating piano. Revive is brief and quiet, but sets a strong, definite mood for its duration. For those who enjoy low-key, ambient electronica, you’re likely to truly enjoy the music here by Imaginary Towers.